The Democratic agenda for changing the tax code is in, and the potential changes are wide-sweeping. This bill has the potential to change the tax code arguably more than the 2017 Tax Cuts and Jobs Act (TCJA) under the Republicans and President Trump. The House Ways and Means Committee passed their version of the bill on Sept. 13th, and the vote is scheduled in that House of Congress soon. Upon passing, the bill would then go to the Senate, undoubtedly having its own proposals and changes to the bill. Regardless of what bill makes its way to President Biden's desk for final signature, we are in for substantial changes to tax law. Of which, there are three components likely to pass that I believe will impact tech employees (and investors) that are worth highlighting.

The number one of which is the changes proposed to ordinary income tax rates. This bill would increase, starting in 2022, the top marginal tax rate from 37% to 39.6% for single filers earning >$400k and married filers with income >$450k. Further, the 35% tax bracket would be significantly reduced, which will cause more income to be taxed at the higher marginal tax rate. Additionally, the bill would also introduce a 4th long-term capital gains tax bracket. For those earning more than $400k, the top long-term capital gains bracket will be 25% instead of the current 20%. And unlike the income tax rate hike starting in '22, this higher capital gains tax would be effective when the bill passed the House Committee on 9/13. So, any realized long-term capital gains after that date may be taxed at the higher rate if the bill ultimately becomes law. A couple of takeaways on the income tax increase is that this bill would substantially increase taxes on those earning between $400-800k and that the marriage penalty becomes much more significant. The increase of the top marginal rate and compression of the 35% rate will be primarily felt by taxpayers, single and joint filers, earning between that income range. Further, the income differential on income tax rates between single and married filers is much smaller than under current tax law, which means there is less of a tax benefit to that tax filing status. Especially here in the Bay Area, it is pretty common for dually employed tech-sector couples to fall into this income range when factoring in cash and equity compensation. Below is a graphic detailing the changes to the income tax rates from our friends over at Kitces.com. 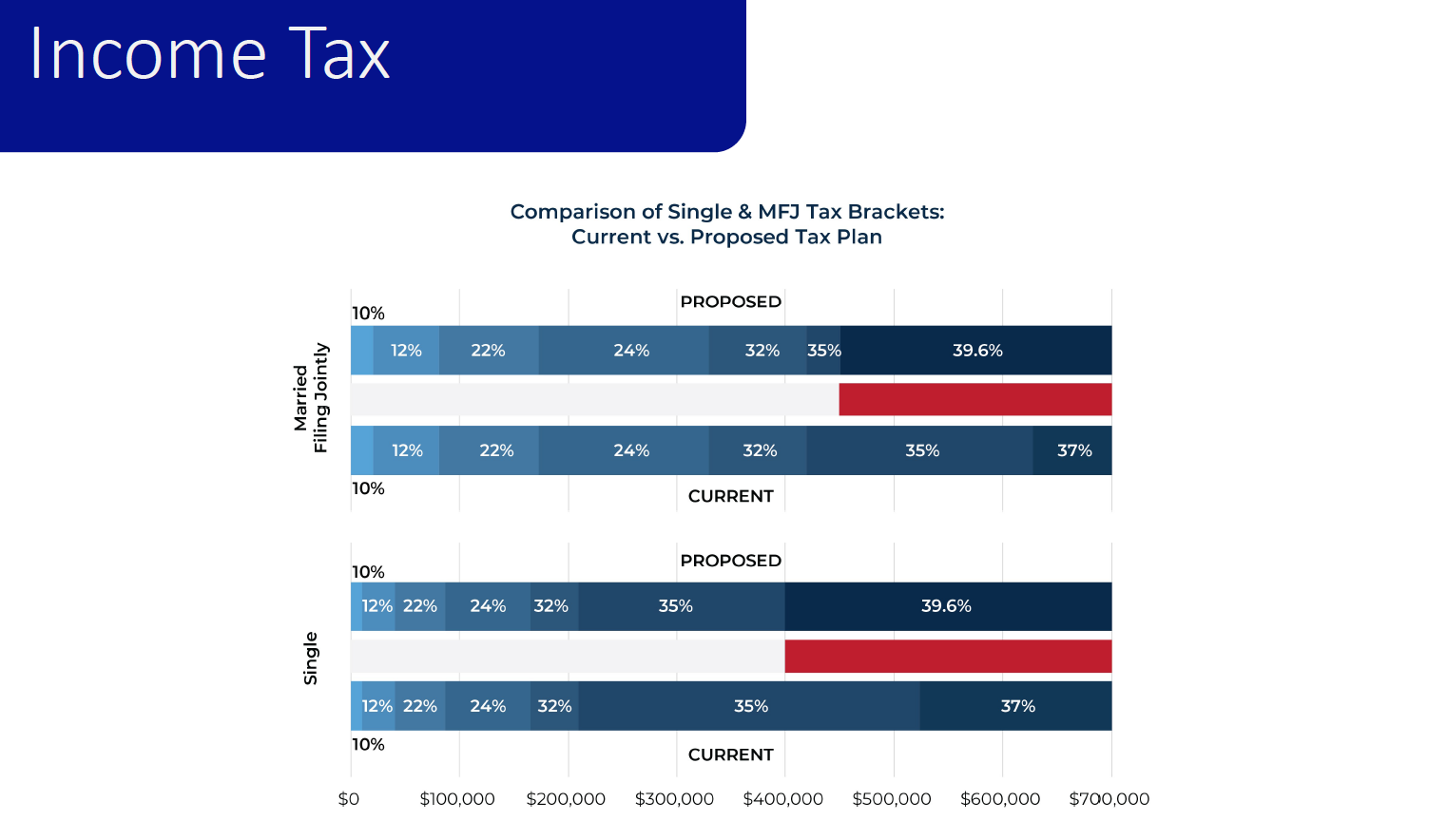 The second tax law changes revolve around retirement accounts. This bill would eliminate the possibility of converting any after-tax retirement accounts to a Roth account starting in 2022. This provision efficiently destroys the ability for individuals to do the backdoor Roth IRA contribution strategy, which has been a strategic maneuver for many high-income earners to diversify their asset location across different types of taxed accounts.

Further, this bill would prohibit taxpayers in the highest marginal tax brackets to do any Roth Conversions on pretax money starting in 2032. This 10-year window, while a long time, is strategic by lawmakers because of the new Required Minimum Distribution rules that came into effect under the SECURE Act. Under that law, inherited IRA's must distribute the total value of the account by year 10. So, for those taxpayers who inherit IRA assets in the next ten years, they would have a shorter (and shorter) timeframe to convert the account to a Roth, even if they do not need the money.

Lastly, on the retirement account front, this bill would eliminate IRA's from investing in any asset that has an income, asset, or licensing requirement. While this may sound innocent, it actually takes a shot at many start-up tech investors who invest in these companies in their self-directed retirement accounts. Given the fact that one must be an accredited investor (income or asset level requirement) to invest in start-ups, investors would become barred from being able to invest in their retirement accounts. I know many investors who direct these start-up investors through their self-directed IRA's and Roth IRA's for tax benefits, and this law would be a direct hit to this strategy.

The third provision in the law takes a shot at Estate taxes. Under this bill, starting in 2022, the estate tax exemption amount would revert to the inflation-adjusted, pre-TCJA level, which is $5.85M for an individual and $11.7m for couples. Adding insult to injury, the law would include Grantor Trusts in the decedent's estate for estate tax purposes. Historically, these kinds of trusts have not been valued in the decedents' estate, and the utilization of the various forms of Grantor Trusts (GRAT, GRUT, CRAT, CRUT, ILIT, etc.) have been effective strategies in reducing one's total estate for estate tax purposes and maximizing the amount of wealth one can pass to their heirs or charitable organizations. However, if this bill becomes law, that would unfortunately no longer be the case. So for clients who will run into estate tax complications (those with estates above the exemption amount), the final months of 2021 may be an excellent time to revisit your estate plan with your wealth and estate planner. I see a lot of busy estate planners in the next few months.

And lastly, what is not in the bill. A few key provisions did not make it into the House Committee's bill that have been floating around the policy dialogue over the last few years. The first of which is a Wealth Tax. While a hot debate in policy and economic circles, this new type of tax has not been proposed and most likely will not as the bill goes to the Senate. Further, this type of tax would most likely run into substantial constitutional law issues. Of course, time will tell what is in the final version, but this provision will probably not be in it. The second is the State and Local Income Tax (SALT) deduction ceiling. There has been a big push to eliminate the $10k cap on this deduction; however, that did not find its way into the bill's current form. The elimination of this cap would be a big win for high-income and property value states, California and the Bay Area included. It would allow taxpayers to deduct the total value of their annual property taxes and state income taxes against the federal income taxes. While not in the bill's current form, this provision has the highest chances of finding its way into the final version. Third, and lastly, the elimination of the "Step-Up" in basis for inheriting assets did not find its way into this bill. Under current law, when one inherits an asset, they receive a step-up in tax basis for that asset to its fair market value and thereby eliminates (or dramatically reduces) the potential for capital gains taxes if the inheritor were to sell the asset. There has been chatter in policy circles and the media that this "Step-Up" should be eliminated by the new tax law under the current administration, though as it stands, it does not look like it will become tax law.

To be sure, these are only three takeaways from the tax law, and three policies that appear will not become law. The bill contains many more changes than what we've outlined here, which may be quite meaningful to various taxpayers. With that being the case, it is highly encouraged to work with your wealth management and tax planning team to understand all that is included in the bill and what potential strategies may be appropriate for you as the bill makes its way through Congress and the final law inevitably passes by President Biden's signature.