Yesterday morning the Federal Reserve Board Chairman, Jerome Powell gave a virtual speech at the Kansas City Federal Reserve Symposium, typically held in Jackson Hole Wyoming. The symposium has traditionally been an annual gathering of central bankers from around the world to share perspectives and advance monetary policy through the research each respective Central Bank has conducted over the last year. You could look at it as a nerdy get-away for all of the top macro-economic and monetary policy experts worldwide. It is also not typically the venue that to be implemented innovative and novel economic policy frameworks are announced. It is more of an intellectual reflection than a practical playground. However, this year was different, because, well... because it's 2020.

In his speech, Chairman Powell announced that the Federal Reserve Board of Governors (The Fed), those who vote on the monetary policy every month at our Central Bank, will adopt a new form of policy moving forward. To provide some context, the Central bank is charged with a "dual-mandate," namely full-employment, and price-stability. At its core, these mandates essentially mean that the Federal Reserve should do all that is in their power to keep the economy maximally employed (i.e., have as many jobs throughout the economy as possible), and a general and consistent level of prices throughout the economy (i.e., inflation). Yesterday's policy change has to do with how The Fed will seek to achieve its mandate of price stability and inflation targeting.

To understand the new policy, we need to understand the policy The Fed has implemented up to now. Historically, The Fed has defined price stability as an inflation level of 2%, as judged by the price index known as the Personal Consumption Expenditures (PCE). Just enough to ensure positive real economic growth, but not too much to cause damaging inflation or too little, causing dangerous deflation. Also, PCE is not to be confused with the Consumer Price Index (CPI). While CPI is also a gauge of general prices and inflation/deflation, it is not the index the Fed primarily uses to base its monetary policy. I won't get into the specific details of why The Fed prefers PCE over CPI; it is merely a distinction to understand, but you can view them as synonymous.

The Fed has sought to achieve this goal over the years, like a competition archer aiming for a bulls-eye. It has wanted to stick it right in the center, repeatedly, and have as few deviations as possible. To The Fed, having a 2% inflation rate has been the ultimate end goal, regardless of where inflation has been previously. As of today, that is no longer the case.

The Federal Reserve will now be implementing a novel, flexible form of inflation targeting. Instead of viewing the 2% target as a bulls-eye to hit month-in and month-out. They will now consider the mark as something to hit on average, over time. In other words, moving forward, The Fed will allow actual inflation to run above and below 2% so that the average rate of inflation over time is 2%. The policy change may sound inconsequential, but it is a substantial shift in Fed thinking and policy. The impetus for this policy shift has to do with the year-long study that The Fed recently concluded. They based their study on how it's monetary policy had influenced price levels and inflation, emphasizing the post-financial crisis economic expansion where inflation had run chronically low. In fact, per the Wall Street Journal, in the post-financial crisis economic expansion, inflation only averaged 1.6% over the entire decade. For a more expanded view of inflation over the years, see the chart below. 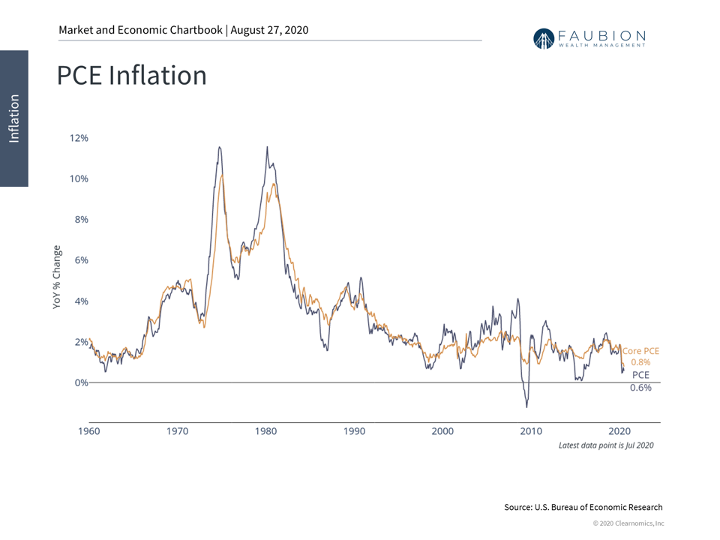 On the face of it, 1.6%  doesn't seem that large of a divergence from the 2% goal. But when thought of in relative terms, that equates to missing the mark by 20% per year, for a decade. Not the best track record, and something that the current Fed seems determined to change.

Policy Change and What Does This Mean For You?

This brings us into the policy change and what this could mean for you. The Fed is now explicitly willing to let inflation rise above 2% so that they can hit the policy object on average over time. In the short-term, this means they will continue to be accommodative to credit markets by keeping interest rates lower for longer. In fact, they have expressed that they do not expect to raise interest rates until 2023. Further, The Fed may be more willing to do additional rounds of asset purchases (Quantitative Easing) if the capital markets become illiquid like earlier in the year, or if they are failing to achieve their target inflation level.

Additionally, this policy may mean that The Fed is willing to make up for lost time. What I mean by that is, for the last decade, we have chronically under-shot that inflation target. So from The Fed's perspective, there have been many years of inflation that didn't happen, but that they believe should have happened under this new policy framework. So, when the economy starts to recover post-pandemic, they may quite possibly be willing to allow inflation to run hotter for longer to make up for the time where inflation has run below its stated objectives.

That is potentially a risky game to play because inflation is not just a monetary phenomenon, but a psychological phenomenon as well. This is where you may have heard the expression "inflation expectations." If people's collective perception is that inflation will rise and keep rising, this in and of itself can cause a self-fulfilling feedback loop. People may then choose to spend instead of wanting to save and invest because their dollars will be perceived to be less valuable in the future. This increase in spending, can beget more spending, and thus more inflation. This is similar to the economic environment experienced in the '70's and into the '80's, where inflation was in the high single digits, to double digits, and economic growth was muted. This macro-economic condition is referred to as Stagflation, and is defined by low levels of economic growth and high levels of inflation. The ultimate cure to this economic environment was for The Fed's Chairman at the time, Paul Volker, to jack interest rate up so high to cause a recession that allowed for inflation to get down to an acceptable level.

To be clear, inflation in personal expenditures and consumer prices is most likely not going to pop up and become a significant issue in the near-term. At least as gauged by the official price indices due to how they are constructed. Also, there are many deflationary forces at play right now. High levels of unemployment, business failures, and the general decline of normal economic activity due to our new COVID-era way of living, generally speaking, are all deflationary forces that The Fed is currently trying to combat.

However, we already see the signs of a different kind of inflation arriving, asset-price inflation. Stocks, bonds, commodities, precious metals, and other real assets like home prices are on the rise. While these are generally viewed as positive developments, that is not necessarily always the case. If asset prices rise due to fundamental factors like real economic growth, productivity, output, and cash-flow generation, you would absolutely want to see a corresponding increase in asset prices as the reward. But suppose these asset prices are going up due mainly to the central bank's monetary expansion policies via asset purchases, artificially low interest rates, and a reduction in private bank reserve requirements. In that case, we may indeed be seeing the first signs of inflation. See below the chart of the Fed's Balance sheet over the last few months, as well as the M2 money supply (the general barometer for how much currency is in circulation). 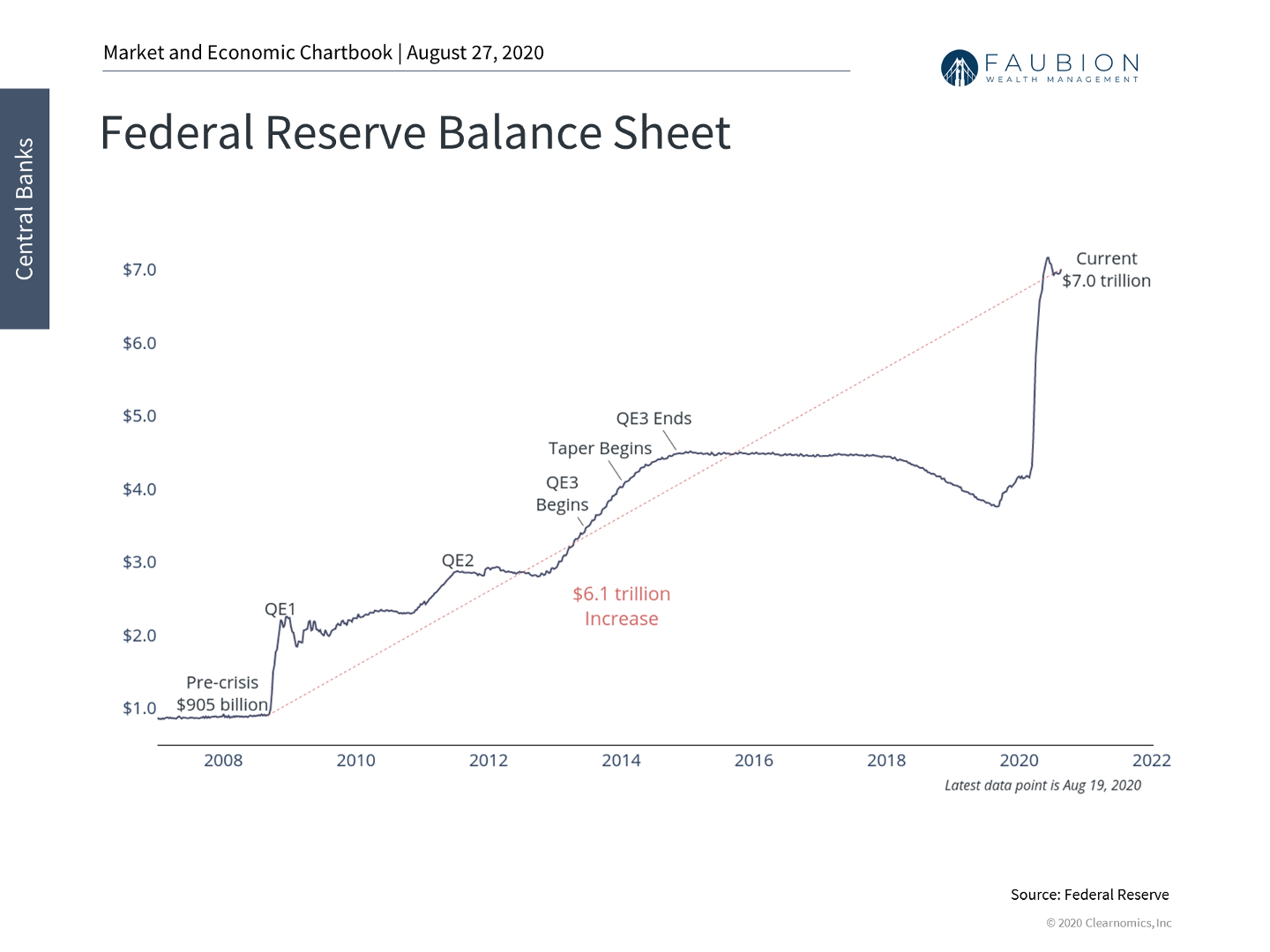 The Fed has expanded their balance sheet by ~$3T dollars in the last handful of months, and the M2 money supply has increased in lock-step.

Lastly, there is evidence that the greenback is losing its value. Not just because asset prices are increasing, but because the dollar's value in the Foreign Exchange market is declining. As you can see below, the dollar value compared to other major currencies around the globe has fallen roughly 10% this year. The coronavirus economic shutdown's initial panic caused the dollar to spike initially when there was a flight to safe-haven assets. But since then, it has been on a steady march downward. 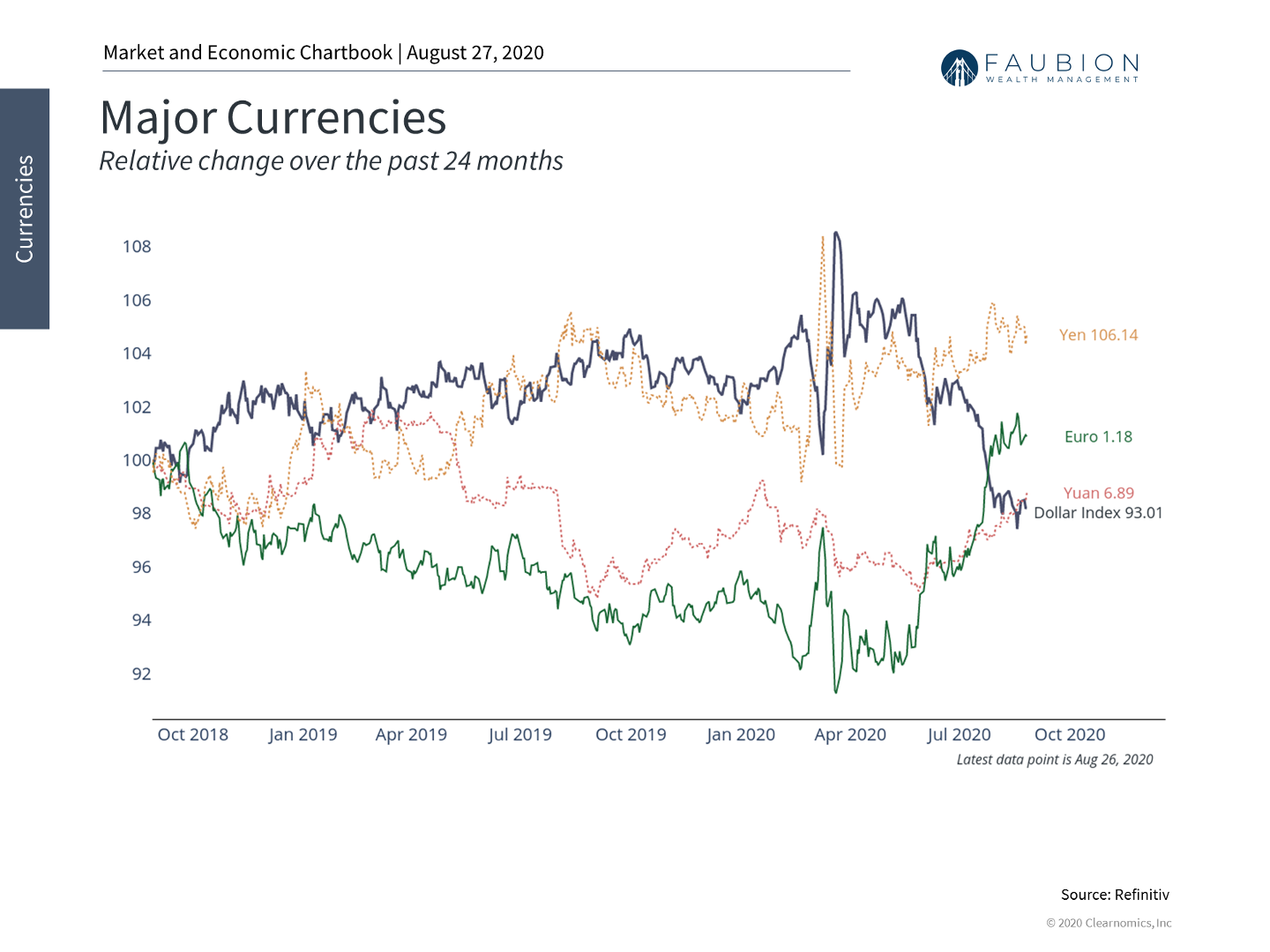 So what is the bottom line? Of course, no one has a crystal ball and can foretell the future of where inflation or asset prices are headed from here. However, these are powerful economic dynamics at play and are essential to remain aware of, especially as it relates to one's wealth and investment strategy.

If you any questions about this at all, please don't hesitate to reach out.